Mayor Roxann Wedegartner is committed to building our long awaited skatepark. We are working closely with her on this project and will update the public as information becomes available. We appreciate your patience and look forward to working with the Mayor.

The long-awaited skatepark the skating community has been dreaming of is finally becoming a reality! At the April 26th meeting, Pillar Design Studios revealed the final design concept for Greenfield’s just under 12,000 sq ft park to be located in the northern section of the Chapman & Davis Street Parking lot. The progressive design features street and transition elements for all skills levels and features a special nod to Greenfield’s very own Poet’s Seat Tower. With the design phase wrapping up, construction could begin as early as the fall with the park slated to be completed by June 2023.

Recreation Department unveils skate park design – $780K, 11,000-square-foot downtown space expected to be ready by next spring – Local skate-boarding enthusiasts gathered at the city’s Sanderson Street offices Tuesday evening for a reveal of the final design of the new skate park, slated to be built in the northern portion of what is now the public parking lot between Chapman and Davis streets. “It’s a dream that I had said, ‘Once I get the skate park built, I’ll officially be able to retire,’ ” said Recreation Director Christy Moore. “I don’t plan on retiring, but I’m glad that’s it happening before I’m ready to.” The project, Moore noted, has been a “true community effort.” “We’ve had fundraising in the community,” she said. “We’ve had capital funding from City Council .We received the $400,000 PARC (Parkland Acquisitions and Renovations for Communities) grant. Without everyone’s help, this would not happen.” 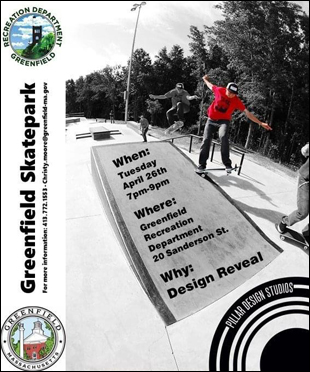 Please Join Us on April 26th for Greenfield's Skatepark design reveal! On April 7th a public meeting was held where park users and community members provided feedback and suggestions after discussing three different Design Concepts A-C. Based on input from this meeting a final Design Concept will be presented by Pillar Design Studios. This final design incorporates skatepark transitions and elements, landscaping, shade structure, and earthwork which includes drainage improvements to the site.

Calling all skaters – we want to hear from you! Join us and share your input on design elements and concepts for the new skatepark.

You can also make a donation to the Skatepark by: 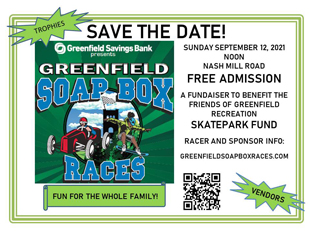